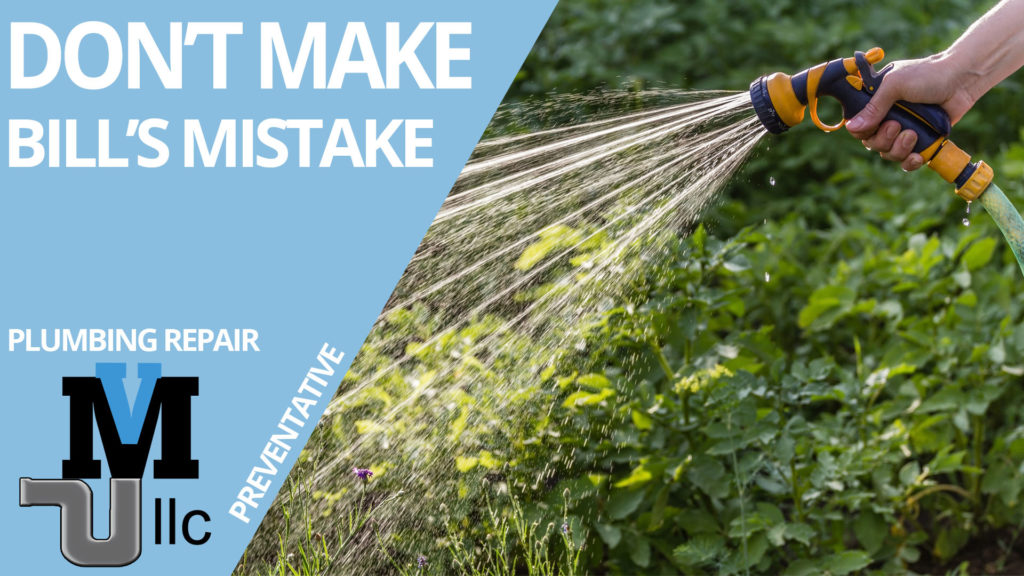 The story you’re about to hear is true the names have been changed to protect the embarrassed!
There was this guy we’ll call “Bill.” Bill had the bad habit of stretching out the hose while it was still attached before putting it away. Now you might be thinking “Wait, I do that…”

But that’s not the problem

What Bill would do next is an absolute no-no. He would “crack the whip” to get the kinks out of the hose. What happened to him one time ensured he’d remember to never do it again.

After watering his garden in his back yard, Bill was getting ready to put the hose away. Now the hose is attached to the spigot (spicket in Pittsburghese) on the side of the house and that’s just out of view from where Bill is standing. Keep that in mind.

With a tug, Bill pulled the hose out straight but there were still a couple kinks. “No problem” Bill thought as he jerked the hose back and cracked the whip like he’s done so many times before. That’s when it happened.

Bill heard a thunk! And thought he heard the water start gushing out at the spigot for a brief moment and then… It stopped?! Huh? That was strange. As Bill began casually wrapping up the hose, he heard a blood curdling scream “BIIIILLLL!!!”

Bill’s wife Angry (Angie! Darn you autocorrect, but that was funny.), called him to see a horrifying sight. The picture was coming together in slow motion detail as Bill ran to the side door. On the end of the hose was… the spigot and a short piece of pipe! Where the spigot used to be firmly attached to the wall, a wet and empty hole. Bill could hear what sounded like a waterfall inside between Angie’s shrieks while she would catch her breath.

That was the single thought running through Bill’s mind as Angie shouted it in his ears. But how? How do you stop the water when the spigot is ripped off the pipe?! The shut off valve, “Where’s the shut off valve?!” Bill thought as he searched frantically.

Looking up, he traced the pipe along the ceiling and saw it dropped down behind a stack of boxes. Of course the boxes are heavy. Bill managed to get the boxes out far enough to reach the main shutoff valve and turn it off.

Pipes are strong but won’t take abuse for long. Bill’s bad habit of cracking the whip weakened the joint over time and it just couldn’t take it any more.

When putting your hose away, bring the nozzle end back to the spigot. Turn off the water and open or remove the nozzle to release the pressure. Then remove the hose from the spigot and wrap it up. Follow those steps and you won’t have the same problem Bill did.

Don’t put anything in front of the main shutoff valve. Make sure you know where your shutoff valves are located. You’ll need to get to it fast in an emergency. The last thing you want to be doing when water is gushing everywhere, is

Having a shut off valve for outside spigots is more than just a really good idea. Just ask Bill.
Schedule an inspection to make sure you have properly placed shutoff valves, and they’re in working order. Click to schedule with Vince.